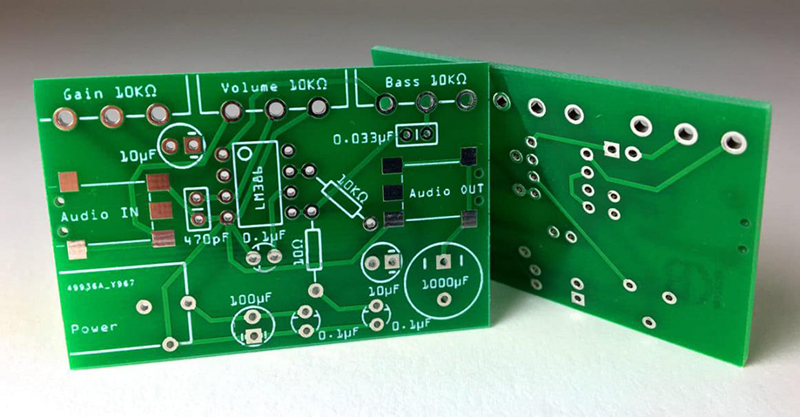 Larger circuits can be difficult to design on a single layer PCB because it’s hard to route the traces without intersecting one another. You might need to use two copper layers, with traces routed on both sides of the PCB.

The traces on one layer can be connected to the other layer with a via. A via is a copper plated hole in the PCB that electrically connects the top layer to the bottom layer. You can also connect top and bottom traces at a component’s through hole:

Some double layer PCBs have a ground layer, where the entire bottom layer is covered with a copper plane connected to ground. The positive traces are routed on top and connections to ground are made with through holes or vias. Ground layers are good for circuits that are prone to interference, because the large area of copper acts as a shield against electromagnetic fields. They also help dissipate the heat generated by the components.

Most PCB manufacturers will let you order different layer thicknesses. Copper weight is the term manufacturers use to describe the layer thickness, and it’s measured in ounces. The thickness of a layer will affect how much current can flow through the circuit without damaging the traces. Trace width is another factor that affects how much current can safely flow through the circuit (discussed below).  To determine safe values for width and thickness, you need to know the amperage that will flow through the trace in question. Use an online trace width calculator to determine the ideal trace thickness and width for a given amperage.

If you look at a professionally designed PCB, you’ll probably notice that most of the copper traces bend at 45° angles. One reason for this is that 45° angles shorten the electrical path between components compared to 90° angles. Another reason is that high speed logic signals can get reflected off the back of the angle, causing interference:

If your project uses digital logic or high speed communication protocols above 200 MHz, you should probably avoid 90° angles and vias in your traces. For slower speed circuits, 90° traces won’t have much of an effect on the performance of your circuit.

Like layer thickness, the width of your traces will affect how much current can flow through your circuit without damaging the circuit.

The proximity of traces to components and adjacent traces will also determine how wide your traces can be. If you’re designing a small PCB with lots of traces and components, you might need to make the traces narrow for everything to fit.